Next season, the Krkonoše region will be able to boast a team playing in the highest national competition in the field of the most watched collective sports. However, the Trutnova basketball players will enter the new championship year under a new coach.

Replacement Kara from Trutnov reports a new cast. Tomáš Veselý takes over the women’s team and in the new season will have the task of improving last year’s position in the Renomia Women’s Basketball League.

Basketball club Kara Trutnov announced news for Renomia ŽBL next year. The participants in the highest domestic women’s competition have a new coach. He became Tomáš Veselý. The experienced coach, who lives in Dvór Králové nad Labem and will turn 52 in a month, previously trained at ŽBL Karlovy Vary, KP Brno and Slovanka. He attended the World Universiade in Kazan as an assistant for the national team, and was also an assistant for the U20 and U18 national teams. Most recently, he worked for the extra-league juniors of NH Ostrava.

Fantasy under deep baskets. Kara finished the play and celebrated the save from Renomio ŽBL

Michal Martišek, who led Trutnov as head coach for the last four seasons, became the manager of the league team.

“I really appreciate the opportunity to train at ŽBL Trutnov, because Trutnov is the bastion of basketball in East Bohemia and because I’m coming home,” Tomáš Veselý told the club’s website. “It depends on how we gather the team for the new season. I want the team to step up and come together. Then interesting things will be achieved,” added new coach Kary Trutnov.

“We welcome coach Tomáš Veselé to our club and we believe that our cooperation will be successful. Our clear goal is to improve the 9th place from last season,” stressed the president of the Trutnov basketball club, Vladimír Smilnický. “I am very pleased that Michal Martišek is staying at our club, moving into the role of manager and will be in charge of the overall functioning of the A team,” explained Smilnický. 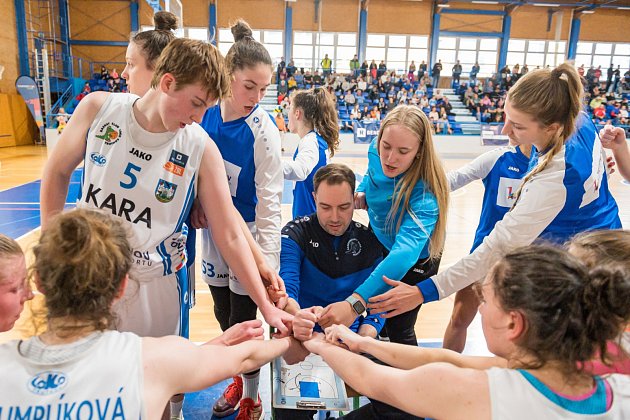 Michal MartisekSource: Jan Bartoš“Choosing a head coach is the first necessary step in my new position. I will be in charge of gathering the staff and the implementation team and other things,” explains Michal Martišek’s new role. “I am very happy that we have reached an agreement with Tomáš Veselý. He is a quality and experienced coach and I believe that this change will be a positive impulse for the team. We are working together on the composition of the player squad for next season,” said by Martišek.

A rare basketball event will take place in Trutnov even before the holidays begin. Next Friday, June 24, Trutnov will be the venue for the international match between the Czech women’s national team and Poland. The match, where the new coach Romana Ptáčková will lead the national team for the first time, will start at 6 pm The entrance fee is a symbolic 30 CZK.

Martišek: I couldn’t have asked for a better final match with the Trutnov bench